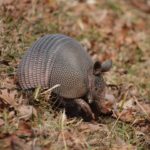 Armadillos are known for creating burrow entrances near your porch or shrubs, as well as uprooting your flowers and plants, and destroying your garden. Contrary to popular belief, these animals actually prefer the most well-maintained lawns, although they can invade any. These animals can also wreak havoc on your foundation and sidewalks since they tend to dig tunnels and holes near these which can lead to a weak structure.

About Armadillos in Georgia and Why Trapping Them is Important 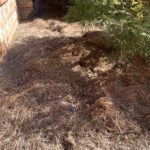 In Georgia, the armadillo that we see is the “Nine-Banded Armadillo”, which comes from the nine breaks in it’s armor. This species measures about 2.5 feet long from the nose to the tip of the tail and weigh an average of 12 pounds. The nocturnal armadillo ventures out of its underground home to hunt for food in the early evenings. Their diet consists mostly of earthworms, scorpions, spiders, and larvae which can lead to an uprooted yard. Holes in your yard can range anywhere from 3 to 5 inches wide and 1 to 3 inches deep, although they can be deeper if it has been raining. A single armadillo can dig dozens of holes alone.

The most serious danger is that the Nine-Banded Armadillo is the only species that carries the bacteria that causes leprosy, which is a chronic infection that can lead to damage of the eyes, lining of the nose, and other organs in some cases, as well as deformities of the hands and feet, blindness, impaired speech, and kidney failure.

Seek a Professional When Trapping Armadillos in Georgia

When trying to remove these pests from your property, it is important to remember that a professional such as Georgia P.A.W.S can better identify the problem and where to set traps in the best spots.